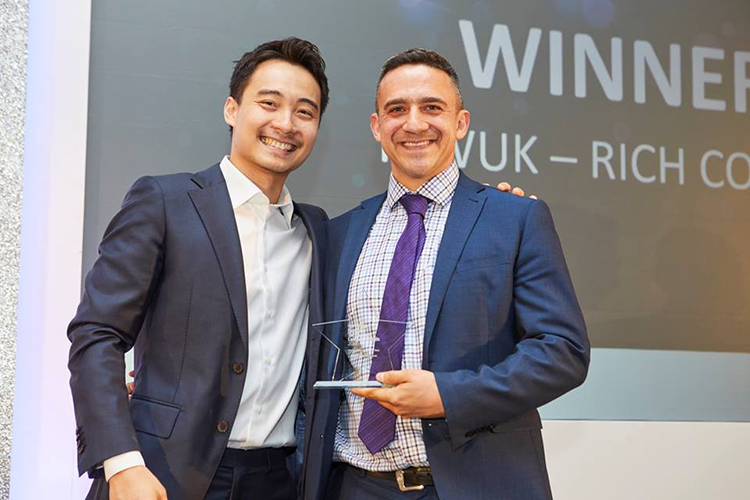 Dimensions are delighted to announce that Richard Conti’s hard work and dedication has been recognised by the Digital Technology Leaders awarded and he was not only nominated for, but won the much coveted “Product Manager of the Year” award for his work on our bespoke ordering system Detail.

Dimensions first began investing in providing a bespoke online solution in 2007 by the name of DUOS, but by 2015, whilst the offering was functionally rich, it was beginning to look dated to users. The Detail project aimed to remove the hassle of uniform management and create a seamless solution from order to delivery.

Members of the original Detail project team, as well as Mark Hampton IT Director for the MWUK Group and Dimensions’ Director of Client Management Phil Harland attended the glittering awards ceremony at the London Marriott Hotel in Grosvenor Square.

Mark Hampton said; “Richard and his team faced enormous challenges to deliver the breadth of functionality in Detail, but Richard never faulted in his leadership, working tirelessly with his team and keeping his famous sense of humour! It’s brilliant to have such inspiring leaders in my team, and Richard’s win was well deserved.”

Richard said; “I was shocked to be nominated, and to win was fantastic. I couldn’t have won without the support of my team, who made the Detail project the success it was. It’s a huge personal achievement for me and I’m thrilled to have won against such strong competition.”