Z is for Zips 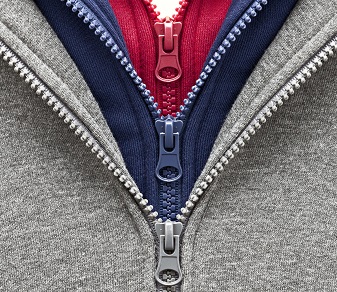 The story of the humble zip started in 1851, when Elias Howe received a patent for an "Automatic, Continuous Clothing Closure”.  However, Howe chose not to market his ‘zip’ and missed out on the accolade as being the inventor of this innovation.

In 1893, Whitcombe Judson marketed a "Clasp Locker" which was debuted at the 1893 Chicago World Fair.  The "Clasp Locker" was a complicated hook-and-eye shoe fastener and met with little success.

It was some year’s later in 1913, that a Swedish-born electrical engineer named Gideon Sundback who invented the modern zip and his patent for the "Separable Fastener" was issued in 1917.

The name zip or “zipper” came from the B. F. Goodrich Company, who decided to use Sundback's fastener on a new type of rubber boot.  Boots and tobacco pouches with a zippered closure were the two main uses of the zipper during its early years, but it wasn’t really until 1937 when Esquire magazine named the zipper the "Newest Tailoring Idea for Men" when it beat the button in the “Battle of the Fly”that is began to take off in fashion.

Today, the zip is immensely popular and has many uses from clothing and luggage to camping equipment and pencil cases, so it is difficult to imagine its limited success in the early days.